The secret method to living longer

Pastor Jung Myung Seok set his mind to love God and developed his habit of waking up early at a young age. It began with helping his family to plough the fields and plant crops. Later on, when he began learning the truth about life through the Bible, he formed a habit of praying at predawn in order to use time well and receive wisdom from God. He wanted to make the most of his life, so he asked God about how to live a longer life. In response to his constant prayers, God made him realize the secret to living longer.

In order to live a long and healthy life, people study various subjects, eat various health foods or supplements, take care of their health, exercise, and live their lives running and working hard. Despite all this, they are limited by human life expectancy and their aging bodies. Even a healthy person becomes weak as they age; their body’s ability to function declines, and even their brain cells age and lose their function. No matter how diligently people take care of their health, there is nothing they can do to prevent the body from weakening and losing its abilities with age. So how can a person live longer? Pastor Jung wondered about this.

He searched to find a way for people to get more work done in their youth before growing old. If there were a way to leave behind a greater legacy, it would be like having lived longer.

He came up with a way to use more time than others within the same 24-hour day. It was to wake up three hours earlier than other people as a method to gain more time.

Doing that consistently for ten years would be like having lived one year and three months longer than everyone else. But that wasn’t as much as he had expected, so he continued to look for another way to live 10, 20, or 100 years more. Then he remembered the inspiration that the Trinity had given him.

Hence they can get a lot more work done, and it would be like living that much longer. If he lived with God’s wisdom, within even just ten years, he would be able to take action as if he had lived 20, 30, 50, or 100 years more. Therefore, living with the knowledge that comes from God’s wisdom is the same as living a long time.

Pastor Jung has made sure to follow this realization of doing everything with God’s wisdom in order to live longer. For instance, within one and a half years, he has composed more than 320 praise songs with inspiration from God and the Holy Spirit. That’s equivalent to producing one song every two days. Even for talented songwriters, that is extremely difficult to do within such a short timeframe. He could do it not only because he received inspiration from God, but also because he learned how to wisely collaborate with other skilled musicians. He sees people’s strengths and potential and helps them to develop themselves well so that they can achieve greater goals together.

Moreover, as a preacher who has dedicated his whole life to the Trinity, Pastor Jung has written many sermons and proverbs that teach others about the Bible and heavenly wisdom. His highest record for the most words written in a day is 10,000 words. He completely used up four entire pens on that day. This could not have been done without an extremely focused mind or without the wisdom to use time efficiently. He once said that doing things with wise methods is like solving math questions with the appropriate equations. Through conversing with the Almighty, he has received wisdom and has become a person who can accomplish many tasks in a short period of time. By doing things swiftly, he is able to do one hundred times more than the average person.

He said that people who live without wisdom are people who live short lives. Therefore, they cannot compete with those who receive wisdom from a young age and live longer and more rewarding lives. They travel on a roundabout path because they lack knowledge. Even if they run without sleeping, they cannot keep up with people who have learned better methods and take the shortcuts of wisdom.

Looking at the illustration below, when the destination is just ten meters ahead of you, there is a huge difference between receiving wisdom to turn around and reach the destination in an instant versus getting there by running around the entire Earth. 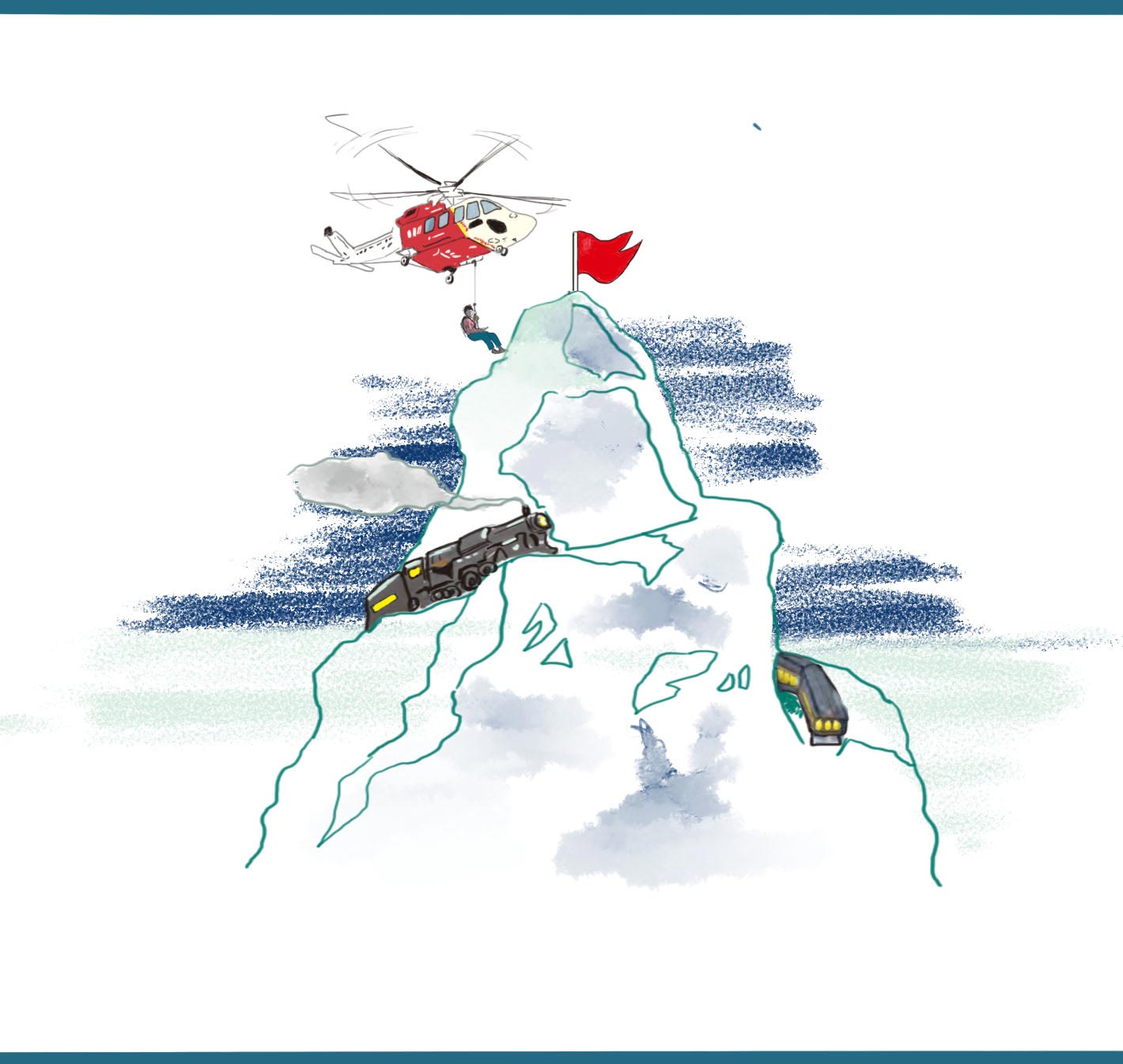 One time P. Jung shared, “In the past, even though I lived in a dilapidated 150-year old house in Wolmyeongdong (his hometown), I couldn’t even think of building a new house because I lacked the knowledge. So I just lived while suffering. Also, because I did not know, I drank from a small spring that came from the ground and lived wishing there was more water. But when I came to live within God and according to God’s wisdom and thoughts, I gained knowledge and was able to develop the area spiritually.”

Even animals can do remarkable things if they are taught and trained by human beings. For instance, dogs can perform certain jobs after receiving special training: police dogs help sniff out drugs, bombs, guns or suspects; search and rescue dogs assist in rescue efforts when someone gets lost or becomes victim of a disaster; herding dogs help calm livestock; and service dogs assist people with physical, sensory, psychiatric, intellectual, or mental disabilities. Compared to regular pet dogs, the skills of these dogs have been developed and their talents are used in more valuable ways after human beings have taught them.

So, imagine if we learn from God who created the whole universe.

How much would we benefit from acting on His wisdom? And how many milestones would we achieve in our limited amount of time?

Pastor Jung’s personal experiences and the experiences of many people who follow him have shown that if human beings become united with the Trinity and live with divine thoughts, they will receive wisdom. When they live spiritually in that way, even a task that would have taken them all day to do can be completed in one hour. Therefore, it is as if they have lived more than twenty times longer than other people. This is a life of wisdom. It is the way to live the longest life and the way to accomplish the largest amount of valuable work in that time. When we see what Pastor Jung has accomplished thus far, we can’t help but admit that he is a man of wisdom who lives to the fullest each and every day.

Although the Outside Is Beautiful, the Inside Is Different. You Can Tell by One’s Actions

Prepare Yourself and Your Daily Life Well

Don’t Just Think About Your Difficulties. Think of What is Good as Well.